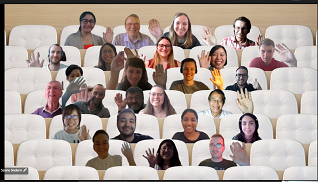 After 11 successful ICG Montpellier Summer Schools, 2020 sadly was cancelled as a result of the impact of the Covid virus. Early expectations were that 2021 would go ahead as planned but as time passed the possibility of a live event receded and planning for a virtual event began. Because of a lack of experience in running a Teams meeting and awareness of the many potential pitfalls we had concerns over our ability to maintain the interaction between teachers and attendees that is such an important feature of our schools. Prof Hehlen took courses on Teams and many trial runs took place that only seemed only to succeed in uncovering every mistake that could be made and the many idiosyncrasies of the software. In the end the number of participants registered was just 22 and this certainly helped to maintain a feeling of intimacy for the week.

Finally, we came to the opening day. While Profs Conradt and Parker initially resolved to go to Montpellier to provide support for Prof Hehlen, finally travel restrictions and quarantine requirements prevented Prof Parker attending. Sunday afternoon was an opportunity for attendees to register formally, to meet and to check the operation of the system. The real event though started on Monday morning at 8.15am with a welcome event that required a response from participants and set the tone for what followed to encourage mixing and conversation. Each lecturer was tasked with setting at least one interactive quiz during their talk. The talks followed a standard pattern except that one day focussed on problems related to viscosity using 4 experts in the area. In part these talks replaced those of Prof Cormier who had decided to withdraw from the course this year following many years of active, expert and very valuable contributions on the use of X-ray diffraction to determine structure. We wish to thank here all those able to contribute and willing to navigate an online environment: Prof R Conradt, Prof J Deubener, Prof P Florian, Prof R Hand, Prof B Hehlen, Prof M Ojovan, Prof J Parker, Prof A Takada, Prof R Vacher and Prof Yuanzheng Yue. We also thank Mrs M Boscus for assistance with the administration.

We ran Tutorials ‘Under the Palm trees’ as part of the course structure and created a number of discrete rooms where they could be held on two afternoons in the week. Students had to sign up for the one or at most two they wished to attend and the reduced number of students attending the course meant relatively small groups and encouraged a very useful level of discussion. Our questionnaires responses showed that these were a particularly popular teaching tool.

Another important feature that was maintained was the division of the group into 4 teams each required to produce a talk based around a set project theme. The allocation between projects was based on individual students interests as expressed in a short introductory session on the opening afternoon when each gave a 5 minute presentation. The projects were based on finding ways that glass could be used to support various UN 2030 goals based around reducing climate change, developing a circular economy, improving health and creating sustainable cities. These teams were able to meet and develop a shared presentation in a virtual room allocated to them. The final presentations were made to the whole group. The teaching staff formed a virtual panel of judges and attendance was better than at live events where many often have to return home early to urgent duties.

On the penultimate evening we arranged an experimental social event to which attendees were encouraged to bring a glass of wine or similar. As part of this a 15 minute slide show on Montpellier, its history and architecture was presented by Prof Hehlen. This was followed by a social mixer game using the chat facilitate to ask other participants fixed questions to discover anyone present with certain characteristics such as having a brother, wearing black socks, playing a musical instrument with the constraint that all questions had to be phrased politely. The tempo and pressure built up rapidly as people had to choose between answering others and asking their own questions. In spite of the chaotic atmosphere a winner finally emerged and conversation slowed to a more manageable pace.

The final questionnaire responses showed widespread agreement that the event had been remarkably successful. Indeed their rating of 8.8 out of 10 for the overall course was one of the highest achieved. An oft repeated comment was the success of the small group tutorials and a request that more should be run. Another was to provide a little more practical information particularly on glass making rather than too much theory. On the other hand, a slot in the timetable where questions could be raised did not produce a response.

In spite of the successful outcomes those attending nevertheless expressed a strong preference for a live event although 2 or 3 had been able to join who otherwise could not have done so. We hope to return next year to a more traditional school in Montpellier.

A Fantastic Year For The Global Glass Community

We left behind a fantastic year for the global gla...Read More